This guide is about how to setup a development environment for ROS 2 on Windows.

Only Windows 10 is supported.

Chocolatey is a package manager for Windows, install it by following their installation instructions:

You’ll use Chocolatey to install some other developer tools.

Open a Command Prompt and type the following to install Python via Chocolatey:

Open a Command Prompt and type the following to install them via Chocolatey:

Run the installer with default parameters, as the following commands assume you used the default installation directory.

This command sets an environment variable that persists over sessions:

If you already have a paid version of Visual Studio 2019 (Professional, Enterprise), skip this step.

Microsoft provides a free of charge version of Visual Studio 2019, named Community, which can be used to build applications that use ROS 2:

Make sure that the Visual C++ features are installed.

An easy way to make sure they’re installed is to select the Desktop development with C++ workflow during the install. 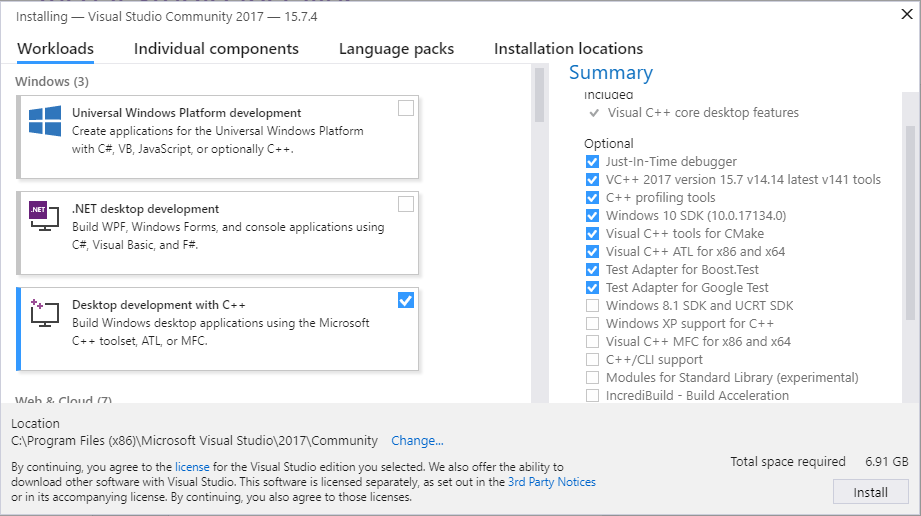 Make sure that no C++ CMake tools are installed by unselecting them in the list of components to be installed.

If you would like to use another DDS or RTPS vendor besides the default, Eclipse Cyclone DDS, you can find instructions here.

Some of the examples require OpenCV to be installed.

You can download a precompiled version of OpenCV 3.4.6 from https://github.com/ros2/ros2/releases/download/opencv-archives/opencv-3.4.6-vc16.VS2019.zip .

Assuming you unpacked it to C:\opencv, type the following on a Command Prompt (requires Admin privileges):

Since you are using a precompiled ROS version, we have to tell it where to find the OpenCV libraries. You have to extend the PATH variable to C:\opencv\x64\vc16\bin.

As some chocolatey packages rely on it, we start by installing CMake

You will need to append the CMake bin folder C:\Program Files\CMake\bin to your PATH.

Once these packages are downloaded, open an administrative shell and execute the following command:

Please replace <PATH\TO\DOWNLOADS> with the folder you downloaded the packages to.

You must also install some additional python dependencies:

Select the Open Source version and then the Qt Online Installer for Windows.

Run the installer and install Qt5.

We recommend you install it to the default location of C:\Qt, but if you choose somewhere else, make sure to update the paths below accordingly. When selecting components to install, the only thing you absolutely need is the appropriate MSVC 64-bit component under the Qt -> Qt 5.15.0 tree. We’re using 5.15.0 as of the writing of this document and that’s what we recommend since that’s all we test on Windows, but later Qt5 versions will probably work too. Be sure to select MSVC 2019 64-bit. After that, the default settings are fine.

Finally, set the Qt5_DIR environment variable in the cmd.exe where you intend to build so that CMake can find it:

This path might change based on which MSVC version you’re using or if you installed it to a different directory.

To run rqt_graph you need to download and install Graphviz. The installer will ask if to add graphviz to PATH, choose to either add it to the current user or all users.

Get the ROS 2 code¶

Now that we have the development tools we can get the ROS 2 source code.

Get the ros2.repos file which defines the repositories to clone from:

Next you can use vcs to import the repositories listed in the ros2.repos file:

If you would like to use another DDS or RTPS vendor besides the default, Eclipse Cyclone DDS, you can find instructions here.

Fast RTPS is bundled with the ROS 2 source and will always be built unless you put an AMENT_IGNORE file in the src\eProsima folder.

To build the \dev\ros2_galactic folder tree:

We’re using --merge-install here to avoid a PATH variable that is too long at the end of the build. If you’re adapting these instructions to build a smaller workspace then you might be able to use the default behavior which is isolated install, i.e. where each package is installed to a different folder.

If you are doing a debug build use python_d path\to\colcon_executable colcon. See Extra stuff for debug mode for more info on running Python code in debug builds on Windows.

Start a command shell and source the ROS 2 setup file to set up the workspace:

This will automatically set up the environment for any DDS vendors that support was built for.

It is normal that the previous command, if nothing else went wrong, outputs “The system cannot find the path specified.” exactly once.

Note that the first time you run any executable you will have to allow access to the network through a Windows Firewall popup.

You can run the tests using this command:

--merge-install should only be used if it was also used in the build step.

Afterwards you can get a summary of the tests using this command:

To run the examples, first open a clean new cmd.exe and set up the workspace by sourcing the local_setup.bat file. Then, run a C++ talker:

In a separate shell you can do the same, but instead run a Python listener:

You should see the talker saying that it’s Publishing messages and the listener saying I heard those messages. This verifies both the C++ and Python APIs are working properly. Hooray!

It is not recommended to build in the same cmd prompt that you’ve sourced the local_setup.bat.

Continue with the tutorials and demos to configure your environment, create your own workspace and packages, and learn ROS 2 core concepts.

The ROS 1 bridge can connect topics from ROS 1 to ROS 2 and vice-versa. See the dedicated documentation on how to build and use the ROS 1 bridge.

The default middleware that ROS 2 uses is Cyclone DDS, but the middleware (RMW) can be replaced at runtime. See the guide on how to work with multiple RMWs.

If you want to be able to run all the tests in Debug mode, you’ll need to install a few more things:

See Maintaining a source checkout of ROS 2 to periodically refresh your source installation.

Troubleshooting techniques can be found here.